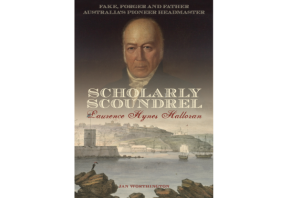 Scholarly Scoundrel – biography of Laurence Hynes Halloran by Jan Worthington (2016) published by Halstead Press. A sailor, scholar, bigamist, adulterer, liar, murderer, forger and convict who shared his life with wives, mistresses and 21 children.  A stranger than fiction tour through the high society and low life of a bygone world. An Irish orphan, he navigated sprawling cities and rising colonies, preached in churches and wallowed in prisons, founded schools and impersonated clergymen, fought in the Battle of Trafalgar and was transported to Australia for forgery.  Laurence was a noted educator who founded schools and left a lasting stamp on Australian society.

Scholarly Scoundrel: hard cover, 256 pages, 227 images, maps and pedigree charts, AUS $34.95 plus postage, packaging and handling AUS$17.00. The books are available from the author and from bookshops. 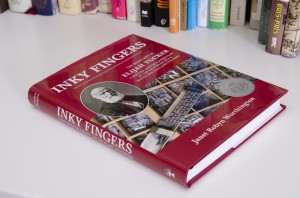 Inky Fingers – The Biography of Elijah Tucker (1811-1894) by Janet R Worthington An English printer, editor, journalist and noted New Zealand colonist, with left wing political views who emigrated with his wife of French descent and five children to New Zealand where he was involved in many early newspapers. Silver medal winner in the Australia/New Zealand Best Regional Non-Fiction category of the 2012 Independent Publisher Book Awards.

Inky Fingers: Hard cover with jacket, illustrated with over 120 photographs, maps and pedigree charts, 239 pages, US and AUS $40.00 plus $17.00 postage packaging and handling.  The books are available from the author. 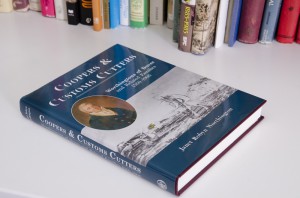 Coopers & Customs Cutters – Worthingtons of Dover and Related Families 1560-1906 by Janet R Worthington (1997). A family history centered around Benjamin Jelly Worthington (1763-1822), a Customs Cutter Commander who worked for the Revenue Service on one of busiest sections of the south coast of England at the height of the smuggling era. In the mid 19th century family members began to disperse and became doctors, artists, farmers and three were knighted.

Coopers & Customs Cutters: Hard cover with jacket, illustrated with over 182 photographs, maps and pedigree charts, 324 pages, US and AUS $40.00 plus postage, packaging and handling $17.00.  The books are available from the author.

Green Frogs: Hard cover, illustrated with over 128 autographs, 147 pages. The books are available from the author and in bookshops. 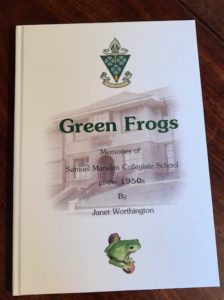 Green Frogs – Memories of Samuel Marsden Collegiate School in the 1950’s by Janet R Worthington (2016). Reminiscences of a group of Old Girls and Teachers combined with facts and photographs, this memoir focuses on the background and experiences of a changing post war church school catering for day girls & boarders in Wellington, New Zealand.