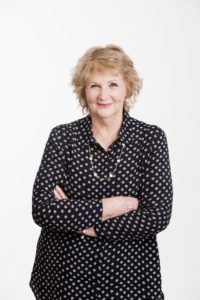 Jan developed her interest in genealogy after researching her own family history, becoming involved with the Society of Australian Genealogists in 1981 and then developing the use of computers in genealogy for the Society. She wrote Computers for Genealogy which ran to six editions and after thirteen years as Convenor of the Society of Australian Genealogists (SAG) Computer Users’ Group, educating members in the use of computers, she donated the copyright of the booklet to the SAG. In 1988 she was instrumental in participating in the negotiations to obtain the gift of Irish transportation records from the Irish Government to the Australian Government and thus to the Society, together with an IBM computer and the database of records. For many years she was Chairman of the Australasian Genealogical Computer Index (AGCI) Committee which was managed by the SAG and resulted in the capture of millions of un-Indexed records being made available for research on CD’s.

Jan became a Councillor of the SAG in 1984 a position she retained for 25 years, and she was Vice-President of the Society for seven of those years and Honorary Secretary for two years. Jan gained her Diploma in Family Historical Studies under the aegis of Professor Kenneth Cable of the University of Sydney in 1984 and sat her final exam under the watchful eye of ex-British Intelligence agent P. William Filby, genealogist, librarian and author, in the Library of Congress, Washington, USA. She was elected a Fellow of the SAG in 1994 and elected Honorary member of the SAG in 2013.

For many years Jan has ably represented the Society as a Genealogical Tour Leader to Salt Lake City, Utah, the largest genealogical library in the world, where she has assisted members with their research and she established direct contact for the Society to their records so that the Society of Australian Genealogists became the first to be a non- church branch library of the Church of Jesus Christ of Latter Day Saints in Australia. She continues to visit and research in the library at Salt Lake City, having built up close relationships with many of the professionals there.

As an educator she has also written and delivered lectures at the Society as well as for local, interstate and overseas conferences in New Zealand and USA. In 1988, Jan was the Convenor of the 1st International Congress on Family History and Fifth Australasian Congress on Genealogy and Heraldry at Darling Harbour, Sydney, at a time when the profile of the practice of genealogy was raised by the Australian Bi-Centenary. Forty years later Jan will be giving a lecture of the 15th Australasian Congress of Darling Harbour in 2018. Currently, Jan is Chairman of the SAG Diploma in Family Historical Studies and Certificate course committee.

Jan has always been keen to see the Society’s future financially secure. She was actively involved in the search for new premises that led, via the Government Bond Store and the Meteorological Building to Rumsey Hall, all near the Society’s headquarters at 120 Kent Street, Sydney in 2007, all of which involved much negotiation, expense and fund raising. The final acquisition, by purchase, of a floor for the library at 379 Kent Street was an important milestone in the Society’s history and with recent bequests it ensures the viability of the Society in the future.

In 1981 she became founding Director of Worthington Clark Pty Ltd, a genealogical and asset tracing company. She was the Managing Director and the Company Secretary for over thirty years before resigning to pursue her own personal genealogical interests.  Jan Worthington Genealogy is not associated with Worthington Clark Pty Ltd.  She has always been known as Jan Worthington in her role as a professional genealogist and she has been successfully and actively involved in full-time forensic genealogical research, specialising in Australian, New Zealand and British Isles family history and international probate research; adoption using DNA matching; finding long lost relatives and lovers; lost property; missing heirs and researching difficult family histories. She continues her profession enthusiastically. She also works with heritage historians and biographical researchers.

Jan has been involved in research and appeared personally on several TV programmes, including Who Do You Think You Are – Jason Donovan, 7.30 Report, Sunday Night and Can We Help? She has also been a prize in a Women’s Weekly Competition and offered her services at silent auctions to raise money for the annual Cancer Council POSH fund raiser and the UMOJA Centre in Arusha, Tanzania.

An experienced author, she has written many articles on family history for the Society of Australian Genealogists’ Descent magazine, written genealogical book reviews and researched, written and edited many family histories for her clients. After 14 years research on Coopers and Customs Cutters, Worthingtons of Dover and Related Families 1560-1906, Phillimore & Co. Ltd, UK published this family history centred on the life of an ancestral Customs Cutter Commander intercepting smugglers around the Kent coast. She was honoured by the Society of Genealogists, London, by having her family history article; My Surname is Van Treight so how can I be Irish, published as the leading article in their Centenary issue of the Genealogists’ Magazine of September 2011, Vol. 30, No. 7. In 2012 Inky Fingers, the biography of her ancestor, Elijah Tucker, a printer, editor and New Zealand left wing newspaper pioneer, and a Tucker and Caigou family history, won a Silver Medal in the Best Regional Non-Fiction category of the 2012 Independent Publisher Book Awards in New York, USA.  In 2016 Green Frogs, Memories of Samuel Marsden Collegiate School in the 1950’s was published in New Zealand.  The same year, Halstead Press published Scholarly Scoundrel, Laurence Hynes Halloran and Jan personally received a Bronze Medal in the 21st Annual IP Awards at the famous Cococabana Club, New York City. 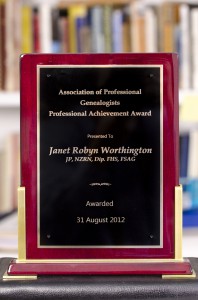 Jan Worthington “has been a leader in the field of genealogical research and practice in Australia for the past thirty years” (2012 Professional Achievement Award citation).

As a result of her involvement with Godden Mackay Logan, heritage and historical archaeologists, and being asked to assist with the identification of the remains of nearly 200 children uncovered during construction of the Prince of Wales Hospital in 1995, Jan is currently researching and compiling a detailed and annotated index to the children of the Society for the Relief of Destitute Children 1852-1914, (the Randwick Orphan Asylum, Sydney,) to be published on a searchable database.

In 2004 the Worthington 17th Century Project was formed and the Worthington surname was registered with the Guild of One Name Studies, London. Jan was one of the founding members and was elected President, a role she continues to hold after the members of the Project decided to form a more permanent Society with broader objectives. The worldwide Worthington Family History Society was formed in 2009 to research and publish information on the lives and genealogies of Worthingtons throughout history www.worthingtonfhs.org

Jan Worthington was regional Vice-President, International Region C for the Association of Professional Genealogists 1988-1994 and was awarded the 2012 Professional Achievement Award at the 2012 Federation of Genealogical Societies Conference in Birmingham, Alabama, USA. The Association, which has over 1,000 members gave the award, created in 2007, to Jan as “a member with a record of exceptional professional achievement and contribution to the field of genealogy through individual excellence and ethical behaviour in published research, public presentations, innovative organisation leadership, writing and editing, or successful business achievement by creating valuable products or services.” 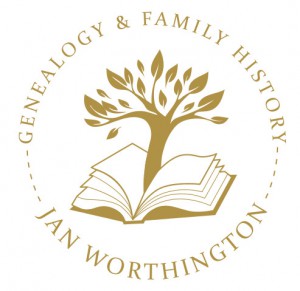